So I chased Kurt up to West Maroon Pass the other day. 11 miles round trip, back before lunch. Training is paying off, he didn't get more than a half a mile ahead of me this time, and I was able to jog some portions. 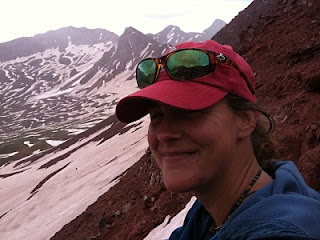 At the very end, going up the shale to the pass proper, which is up around 12,500 feet, I suspect he may have been dawdling and waiting for me while I sucked wind and pumped my slippery tennis shoes up the steps he'd kicked in the last small snowfield. I felt good when I got up there, not beat, so I think that the training is helping, I'm slowly increasing my speed, but I still can't perform in an anaerobic state for very long without caving and wishing I was stronger.

On the way back, the spectacular turquoise of the broken rock nested against the red and purple earth was pretty spectacular to look at, and we checked out the South Bell Couloir, which had two parties climbing in it. We've made tentative plans to boot right up that sucker this weekend, its steep snow, but its in great shape!

If I thought I was challenged before, I've got another think coming. This climb requires crampons, boots and an ice axe. I found a pair of great soft boots made by Teva at the Mountain Sports Outlet in Glennwood Springs, and now I'm hunting around for flexible crampons and the axe that I can borrow. Hopefully the weather co-operates, and I'll get to stand on top of my first Colorado 14er. Fingers crossed!
Posted by Unknown at 8:11 PM