Trampoline training at the RedBrick! 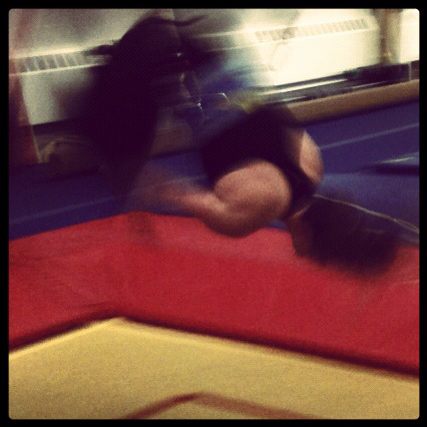 Every Thursday night from 7-8pm the Red Brick hosts Adult Gymnastics. Last week I went in for the first time, and I was immediately intimidated by three level 8 competitor 10 year old girls. I caught them doing their ab work, pike pull ups under the balance beam while they were chatting away.

I don't know, is it weird to be inspired by the body of a 10 year old?? They were ripped, and having fun. The level of discipline was amazing. I asked the mom sitting next to me. "yes, she's been doing it since she was 2. She loves it. She practices about 21 hours a week. She'd do more if I let her.". Gymnastics was her world, and the level of excellence she has achieved was truly outstanding.

"Do you live here?" I asked. No, they were from New York. "How does our little Aspen gym stack up to New York?" I asked.

"honestly, it's great!" she said. "The level of coaching here is equal to anything we could find in New York. She always improves when we come to Aspen, and she loves it here. She has friends here who she looks forward to training with." Olympic level sleepovers, I'm sure.

I was set at ease a bit by the idea that the coaching was so good. I have heard that trampoline training is one of the best things you can do for ski training, and I've been longing to do it for six years. My very first coach, Mike Hickey told me to get a trampoline if I could. I couldn't buy one, so I started looking for places to train. Insurance problems prohibited adult gymnastics at out incredible Bozeman facility, and I was out of luck.

Since moving to Aspen, we've been on a tight budget, and tramp training seemed like it was far off. Enter the city of Aspen parks and rec department, there's rock climbing and trampoline at the Red brick for $15 And here I am at trampoline class.

We warmed up on the spring floor and for the first time in my life I pushed myself up into a headstand. I have been nervous about trying them since my surgery, so I've just been going to the prep and working on the position in yoga, but not actually going up. My neck felt good, the floor was soft, and I pressed up.

Next we kicked into handstands and then it was time to do 180s down the tumble track. Other classes were going on around us, the 12-16 year old boys who are killing it in AVSC (the program that created two time x games medalist Torrin Yater Wallace, now a sophomore at Aspen Valley High) were doing corked out triples on the big trampoline continuously.

Tony, our excellent and enthusiastic coach, dragged out a big landing mat and we bounced down the tumble track learning to do "rodeos", jump up, half turn, splits in the air, half turn, land.

After about 20 minutes we were up to 540s and it was time to warm up front flips.

We did forward dive rolls onto the huge fluffy mat and then it was time to land on our feet. The sensation of vertigo was amazing, very different than landing in a swimming pool! I think something about landing in the water head first changes that rotation sensation...

Next it was time to practice form for back flips into the mat, and then... it was into the harness on the big tramp for backup flips.

I have not laughed and giggled like that since I was six. It was unbelievable to be flying through the air and having so much fun. I'd say it's one of the best natural mood lifters I've ever experienced. I was hooked. And the next morning when I woke up and my core was completely super sore for the next three days, I knew that I had worked out hard, but at the time, I hadn't even noticed.

I spent the next week waiting for Thursday so I could bring Kurt and watch him giggle his way down the tumble track. Thursday was last night, and he did not disappoint. The laugh feat began, and sure enough, several back flips later, my core is wicked sore again!

Ok I think I need to start coming with you to trampoline!!

Time period training on a trampoline can basically help develop strength and muscular as well as assist you lose fat.