My kids are SUPERHEROS! 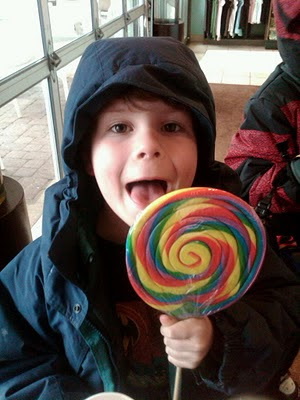 Bodhi and Ethan continually blow me away. They are absolutely thriving here in Aspen. Bodhi has found his adventurous spirit and wants to try as many new things as he can. He watched Mike and Ethan and Ethan ski in the terrain park from the Elk Camp Gondola, and decided then and there that he wanted to ski. This from a boy who has been refusing to ski and getting put in "the tank" at the Treehouse, and generally just harrassing everyone, from my mom to me to Alisa to Ethan.

The next day, after he decided he wanted to ski, he skied from Mid mountain to the base without help in a ski school lesson and was lapping the skittles on Fanny Hill. The NEXT day, he was moved up to Level 4 because he's linking parallel turns on groomed blue terrain.

Ethan, meanwhile, has decided that he likes the way it feels when he gets on the front of his boot, and he is crushing it in every turn, and has now moved up to Level 5. They are both addicted to ski school. In celebration, we ate dinner at an AWESOME restaurant called The Sweet Life at the new base village in Snowmass.

Meanwhile, they are socially integrating in a way that they never have. Ethan is learning to make his way in the world as a less bossy, more open person, with more patience, and Bodhi is opening and making friends right and left. 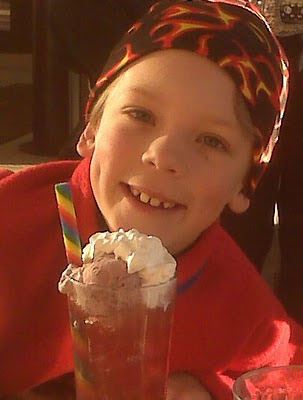 Ethan has had a tough couple of days injury wise. A glass bowl fell off the top of the fridge yesterday and cut his foot. After a minute of tears and a lot of blood, he said to me, "Mom, my foot is cut and I cant make it not be cut by wishing it wasn't. So I am going to practice accepting that my foot is cut." And he stopped crying. And then he told me that it hurt way less when he didn't wish it wasn't cut.

Today, Ethan was playing rough with some kids on the playground, they were rowdying around and having fun, and Ethan got tackled and hit his head on the ice, hard. When we all got home at the end of the day, he was grey and tired and nauseous, so off to the Hospital we went.

In the past, Ethan has milked his illnesses or injuries, being a bit of a drama kid, liking the attention and wanting people to know when he's hurting. Apparently, he's let go of that too.

He told the Doc what was going on, didn't add or embellish, just did the tests and tracked his headache from 1-10 over the course of two hours. We were sent home with instructions on a mild concussion, and he rallied with a little Tylenol. He's doing much better. (I think he handled it better than I did!) I have to say that it was nice to have a paramedic to call, I was trying to stay calm for Ethan, and I think I succeeded well, but I was afraid that he'd really done some damage as he was not acting his usual self at all.

Mike gently filled me with courage, and assessed Ethan over the phone, and agreed that we should go to the hospital just in case. I was glad for his experience, as I tend to err on the side of caution with injuries (to others, not to me...)

Both the boys are caring for each other and helping me out tremendously. They never complain that they are bored, they are always building and reading and drawing, and as we don't have a television, they are constantly coming up with some new, creative way to play. The most INCREDIBLE part of it is how happy they are. Happy, content and at peace. There are no fights. There are no meltdowns. There are tears, but normal and appropriate kid tears.

They feel so free and light to be around, and while they have always been a deep source of joy for me, its wonderful to see them step so boldly into their own, lay down their swords, because they just don't need to fight, and simply thrive. Its awesome!

Email ThisBlogThis!Share to TwitterShare to FacebookShare to Pinterest
Labels: Family