A lovely Ski in June 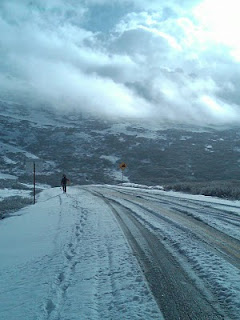 Kurt and I headed up to Independence Pass for a quick ski yesterday. It had snowed the night before about six inches, and had been at freezing temps for two days up there, so we knew we had the possibility of some good skiing. He had gone up the day before with our friend Mike, and I was supposed to go with them. For the first time, I think EVER, I called the morning of and begged off because I was too tired. I slept sooo late, and then went on a hike with Bodhi out into our hills. I got a little sliding in, but it wasn't the ski I'd been hoping for with Kurt and Mike. Ah well. Better to be smart about being so tired.

I also had to go into training at Remede (one of the spas I work at in town)at one, and I didn't want to be delirious with tiredness and unable to pay attention.

I'm not sure whats going on, but I'm listening to my body. For some reason, its wanting naps and I'm not sleeping as well as I have been. I think that I slowed down so much after I got my shots (as is appropriate) that I just don't have the energy that I did when i was working out hard. Its a tough cycle, it takes energy to make energy. So I'm doing that balancing act, walking back toward fitness without killing myself on the way there.

This little ski was just the thing. A short hike up the spine and skin to the top of a little pitch, I did two laps and Kurt did three. We've spent enough time in the back country together, that its very comforting to be able to get out there together, and yet be able to work separately.

I'm used to seeing Kurt way off in the distance on some of our climbs, I follow the skin track and work on picking the line on the way up, see if his track goes where I would have chosen, try to deduce why he picked the line he did, and take the time to climb into my mind and have a look around. 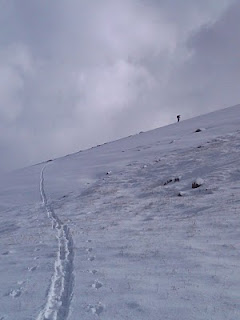 I was slow, but I wasn't dying. I was about 3/4 of the way to the top when Kurt finished his change over and came skiing happily by me without his pack. I waved. "See you on the top in a minute." he said.

I smiled and trucked on up to the top, switched over, we had cloud cover so I wasn't that worried about the snow changing and going quickly, had a quick snack and left an apple for Kurt in the snow by his pack. I figured I'd head down and ski by him when he was about 1/2 way up.

I turned around. He was three feet from me, sweating and smiling. "Hi." he said. He'd managed, in the time it took me to go 1/4 of the way, change over and eat my snack, to ski the entire pitch, change over, and sprint back up it.

"Um. Hi." I said. Okay. I want to be that fit. And I have some idea of what it takes to get there. And I'm not sure its possible for me, but I'm going to do everything I can. He skis as well as he does in part because he is just so incredibly fit. Its time for me to get to work. 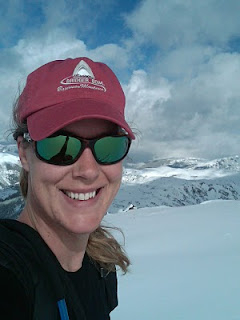 We skied that pitch together, a nice steep shot, and talked about all kinds of things from the history of religion in politics to tactics for staying warm at the tryout when you have to stand around (we were waiting for the sun to come out when that one came up).

It was a beautiful day, we were down by 11, with the rest of the day to play with Bodhi up in our drainage ditch, his very own little river.
Posted by Unknown at 9:17 PM