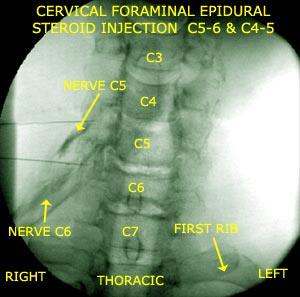 Last Friday, I went in to the Vail Valley Surgical Center, and had C5/6 and C6/7 injected with Dexamethazone (a drug commonly used to treat high altitude cerebral edema, interestingly enough). Dr. Raub of Vail Summit Orthopedics did the procedure again, and I have to say I'm really impressed with he and his team.

This procedure was a bit more invasive than previous procedures, as they went in to my spine from the front of the neck, rather than from the back, and inserted the needle into the foramen where the nerve comes out.

I'm really sensitive to drugs, which is why I am loathe to take them, and the thing that usually affects me the most from a procedure like this is waking up from the anesthesia. The anesthesiologist rocked it this time, although I can't remember most of what happened on Friday (Melissa told me I kept asking her the same questions over and over again...) I was out of there and rolling along just fine fairly quickly this time.

By the morning of the next day, I could already tell that my neck felt better. The structures were sore, where they'd been moved or manipulated, but in the second day I already had better range of motion and less pain. Awesome!

It takes a few days to fully recover, which I never want to admit, because I always feel SO much better. I didn't go to Yoga or anything for the first two days, and I took a short walk on the afternoon of the second day. Sure enough, tired and a little sore after that.

I was seriously considering skiing in the Powder Posse on Aspen Highlands on Sunday, its been dumping here for days, but after I realized that while there is a meter of snow up there, there is still no base, it occured to me that bumping along this soon after a surgical procedure would probably be frowned upon. You see? I can exercise discipline every once in a while...

I went to Yoga for the first time yesterday morning, and that was amazing. I stayed off my neck and head, but had a good practice, and it felt great to get back into the swing of things. I'm still surprisingly easily fatigued, but healing fast. My neck feels SOOOo much better already, and ski season starts on Thursday!
Posted by Unknown at 6:40 PM

Email ThisBlogThis!Share to TwitterShare to FacebookShare to Pinterest
Labels: injury

"You see? I can exercise discipline every once in a while..."

Yes, dearest, but your discipline has never been in question. Your *restraint* on the other hand... (insert one raised eyebrow here)...

And, yes, you showed remarkable and hope-inspiring restraint. Glad you're feeling better.