Ethan hikes the Bowl for the first time!

What a BIG KID! Ethan got an A+ on his book report, which he did on Harry Potter and the Order of the Phoenix. He also worked really hard all year to get his skiing skills all lined up so that he could hike the bowl before the year was out.

On Wednesday, we had 7" of fresh snow and bluebird skies, it was sunny and warm, so I picked him up from school at lunch and took him off to Highlands!  We grabbed some snacks and headed up the Lodge lift, where we met up with Andrew and Jason, two friends who had agreed to come along to help us out and be there for Ethan's first epic mountain adventure!

We rode in the cat to the drop off point, and Ethan was literally shaking. "I'm nervous." he said.

We talked about the fact that he had hiked twice that distance in the past, that hes been skiing double blacks for the last three months, and that he'd be in between two of us. By the time we got out of the cat, he was supercharged.

As we were hiking, Ethan asked, "Mom, when are we going to ski in a Ski plane?"


I said, "Oh, Ethan, you are going to have more adventures on your skis in your lifetime than you can imagine. You are going to hike up mountains, and fly in a pontoon plane, on a glacier plane, in a helicopter, ride in a cat, anything you can think of."

And he answered back, "Then this is the first of many adventures on my skis with you, isn't it, mom?" I swear I was about to fog up my goggles. He gets it! He's psyched to play outside! What more could I want? The kid is happy, healthy, strong, adventurous... hes been a rock star at home, cleaning up, doing his work, helping out with Bodhi and JT (our neighbor kid who is over all the time). He certainly earned his trip up the bowl! 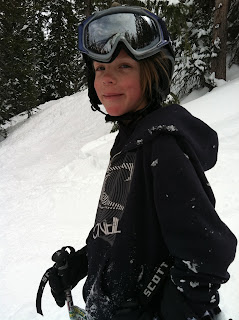 I know he can hike far, but I wasn't sure how he would handle the kind of sketchy super steep sides of the bowl. For the first 100 yards or so you are hiking along a very steep drop off around a rock ledge, and I know lots of adults that get freaked out in that section.

Ethan did SO well! We took a break as soon as we got around the rock, and then we hiked "the Separator" section, the hardest, steepest pitch. He hiked the whole thing without stopping and then took another break on the top.  We hiked the last two sections without stopping, and E was full of energy when we summited.

He looked at Pyramid peak from the top of the Highlands Bowl with absolute wonder, we look at this mountain every morning, its a calming, focusing ritual that we use every day. He was so psyched to see it from a new perspective. 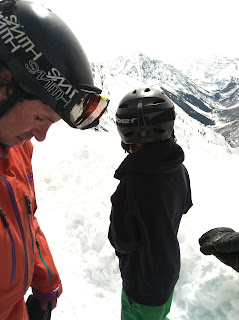 I remember the first time that I skied off the top of Highlands Bowl, I was so nervous. Its a polished dome of a mountain on the top, but Ethan just took off right after Andrew, skied around a bunch of moguls, followed him up on top of the cornice and HUCKED himself off, skiing out of it. I was astounded.

After we got into the trees, the snow got thick and manky. Ethan struggled a bit on his skinny park skis, but stayed after it, and skied the bottom third quite well. We skied G5, which is 40 degrees at its steepest, and 38 degrees sustained. That's quite steep.

The gullies on the way out were awesome, he played all the way down, wore himself out completely, and fell asleep on the Deep Temerity chair on the way out.

I told him that if he carried his own skis all the way to the top, he could keep my bowl strap, and low and behold, he did it, so Ethan is now the proud owner of his own Bowl strap and his own Bowl Pin! 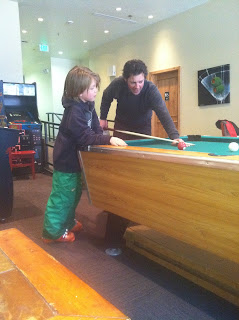 We headed down to the bottom and hit Highlands Pizza to celebrate, where Jason taught him how to play pool. I was SO proud of him! And he was so proud of himself. It was awesome to have friends along to support him, he got high fives all around and was stoked to be the only 9 year old on the top of the bowl! Congratulations, Ethan! I'm so impressed!
Posted by Unknown at 4:45 PM