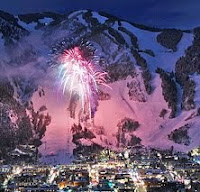 Tonight was an absolute treat. Ethan and I drove over to Aspen Mountain and went down into the empty locker room. we suited up and headed over to the chair at the Little Nell where Ethan was given a torch shaped flashlight. ("Aw, mom, I want something that lights on fire.")

Apparently you have to be 12 to have something that lights on fire. We were the second ones up on the chair, and suddenly, here I am sitting in the dark, swinging in the crisp winter air, bundled up next to my eight year old, skis on, no poles, just looking around and seeing the town fall away behind us.

Riding a chairlift in the dark is a wonderful and strange experience, and doing it with Ethan was a sudden moment of bliss. He tucked right in next to me, suddenly a combination of big kid (gonna ski Aspen Mountain at night) and little boy (tiny and warm under my arm.)

"Mom, this is so cool I can't believe we are doing this." he kept saying. We got up to the top, and he settled right down, he was one of six or so kids who skied in the parade, the youngest of whom was only six years old!" We had the requisite fifteen minutes of waiting around at the top and then the torches got passed around, we were up in the front and suddenly we are off, two leaders, then me, then Ethan, and then John Fayhee, a wonderful instructor from Aspen Mountain right behind him.

I was a little nervous, the Nell is a steepish blue groomer, it was pitch black and we are skiing in a huge snake with things on fire all around us. Ethan, once again, impressed me with his ability to get it together when it really counts. He followed the line perfectly, even over the ice (in a giant death wedge, but he said he is used to sliding and was never worried), and as we crested the hill, about five hundred people let out a huge yell.

We skied it down to the bottom and put out our torches, and put up our skis. The crowd was high fiving Ethan, and asking him how old he was, and he was just absolutely full of pride. We got to stand inside the barricade and watch the huge fireworks display in our ski gear, and then troop back down to the locker room carrying our skis, getting congratulated by the crowd once again. Ethan was just saying over and over, "I can't believe how COOL that was! Lets do EVERY parade there is!"

!! BLISS. "it was pitch black and we are skiing in a huge snake with things on fire all around us" & Ethan's reaction = 'let's do them all forevermore.'. A smile, for your happiness at that moment.