Dispatches to the Road from the Nest 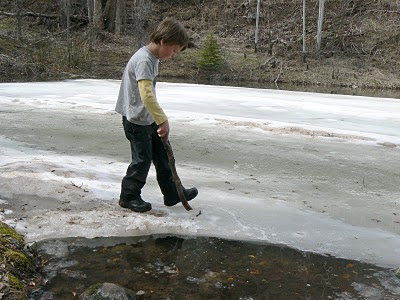 My mom does a lovely job of keeping me in the loop while I'm on the road, and I wanted to share this adventure that the boys had while I was at Academy! 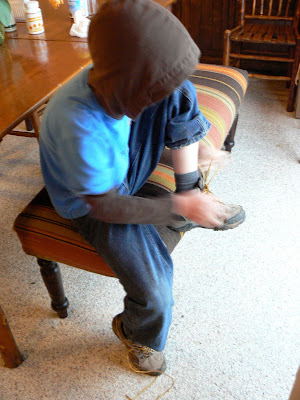 Two little guys groaned this morning when looking outside to see yet another 8 inches of snow had fallen overnight! Just yesterday they were playing in their shirtsleeves. The mallards are doing a combination swim/walk in/on the mushy ice which made us laugh at breakfast. So wonderful that the boys pop out of bed at 6:45 without fuss and are ready to eat breakfast by 7:10. And also wonderful that they are never late for school anymore. And that when we're driving to school they ask, "Are we on time?" 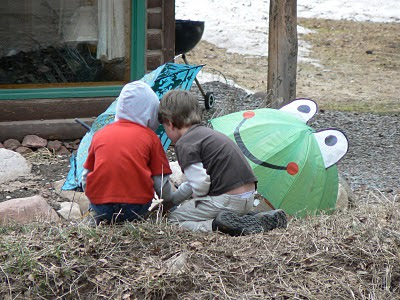 Yesterday, after school, Bodhi tried his luck near the shore testing the pond ice and ended up with one boot slipping through, totally, totally wet. (The water is only a foot deep there.) The only thing that fazed him was his wet sock! So, he sat down on the shore, took off his boot and sock, promptly put the boot back on and continued with his adventure. Then he and Ethan played up on the hill, protecting their paper airplanes against the droplets with umbrellas. Now, that hill is snow-covered again! 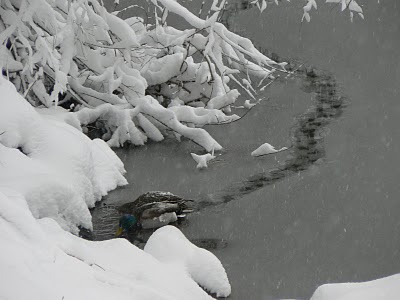 Ethan is going on his class overnight at Rock Bottom Ranch from school today -- totally excited about it, too. He did his homework early on his own volition-- on Tuesday-- so he wouldn't have much to do last night. Bummer that the weather turned to snow, but knowing kids, they'll have a great time anyway. As long as they serve s'mores (which is the secret plan). Bodhi is totally jealous and their game yesterday was "pretend I'm in the second grade with you and we're going on an overnight."
Posted by Unknown at 5:50 PM

Email ThisBlogThis!Share to TwitterShare to FacebookShare to Pinterest
Labels: Family