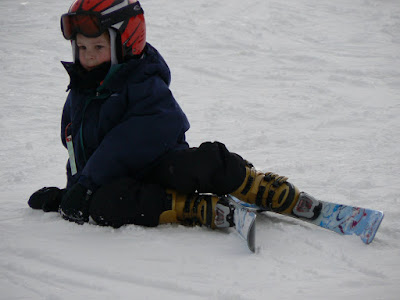 I had no idea that they made it up on the mountain today, but they did! My super awesome mom took both my kids up, and Bridger Bowl's amazing staff took care of them all day. Ethan bombed around the mountain with Shelby, an incredible skier who is really terrific with kids, this is her first year teaching at Bridger, and Bodhi was with the amazing, patient and encouraging Connor today. 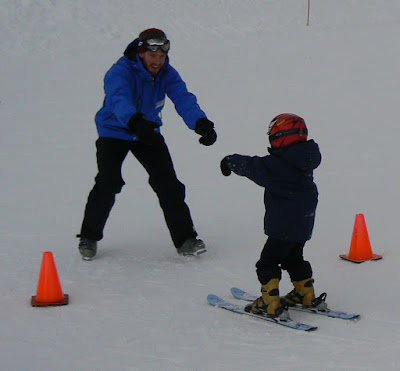 I'm psyched, because while Ethan loves to ski, he's always been a bit of a taker-offer, which drives everyone insane, and this year he told me that one day he wants to ski the grand, "Just like Bill Briggs did when he was young, mom." So I told him to do that one day, he has to be able to make REALLY REALLY good parallel turns, and stay with and listen to his teacher. Lets hope it works!

Bodhi was awesome on his skis last year, he has a really natural way of standing on them, and great balance, but he was afraid of crashing after a kid in play care went down hard, and came in crying early in the season, so we only skied in a hula hoop a few times last year.

Mom got him in his gear, Ethan convinced him to put on his skis, and he actually went into lessons and participated this year! YAY!! At about 2, Dave pulled him out of the group, and I guess Bodhi colored in the office for the rest of the afternoon, so I officially owe Connor a six pack and the office staff some cookies or treats of some kind!

I'm so very excited, I'm amazed that he finally FINALLY got into his gear and into a class, that's HUGE! Thanks, mom, for taking the time and having the patience, and thanks Connor, Shelby and Dave!!
Posted by a at 7:34 PM

Email ThisBlogThis!Share to TwitterShare to FacebookShare to Pinterest
Labels: Family, skiing with your family